BETWEEN ERITREA AND ETHIOPIA THE HOUR OF PEACE HAS COME 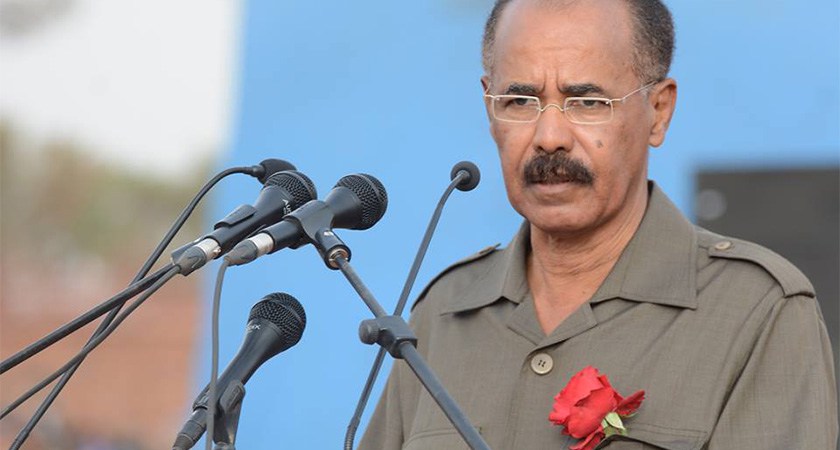 BETWEEN ERITREA AND ETHIOPIA THE HOUR OF PEACE HAS COME

ERITREA WILL SEND A DELEGATION TO ADDIS ABABA.

Eritrea, after Ethiopia announced its commitment to respect the Algiers Agreement which has been  left unimplemented since 2002, replied it will send a delegation to Addis Ababa, Ethiopia.

The United States applaud the Eritrean and Ethiopian leaderships and their path to peace.

The Eritrean response arrived on June 20th, during the celebration of Martyrs Day. A symbolic, important day, representing the candle lit perpetually in memory of those who gave their lives to have a free Country.

It is in fact the day when Eritrea honors the martyrs, men and women, who died fighting to win independence (1961-1991) and to defend the territories in the subsequent clash with Ethiopia, 1998-2000

President Isaias Afewerki has chosen this day to announce, in his speech at the Martyrs Cemetery of Asmara, that an Eritrean delegation will go to Addis Ababa.

Precise words that have retraced, with a historical-political analysis, the causes of the clash between Eritrea and Ethiopia. Words of peace are heard from both sides in this period. The desire that two geographically and culturally close peoples are friends again, to have a peaceful future.

2018, said President Afwerki, is an important year. At the centre of which is the relationship with Ethiopia, that has become a “question” after the clash for the disputed border region, which caused the rift between the two countries.

Unfortunately, after 1991, a turning point for Eritrea and Ethiopia that had fought against the dictator Menghistu Heilè Mariam, relations between the two countries did not follow the desired path. In fact, in 1998, we arrived at a clash that damaged both peoples. In Eritrea, instead of growth and development, the door of suffering opened up for two generations.

The country has been in a deadlock since 2002. A crisis made worse by the last American administrations. Now, says President Isaias, with the administration of Donald Trump, the attitude towards the countries of the Horn of Africa has changed for the better.

As for the Ethiopians, he continued in his speech, they are also victims of the political choices of the TPLF, Tigrayan People’s Liberation Front, a party so far hegemonic.

The policy of the TPLF in these twenty-seven years has stopped economic growth and development, not only in Eritrea but also in the Ethiopian area of ​​Tigray, which worked and traded with nearby Eritrea. In a situation of peace and tranquility both countries could have enjoyed strong and positive ties.

However, explains the President, the TPLF has pushed it too far right inside it, creating strong discontent.

They are the ones who wanted change, mobilizing those who thought that #enough is enough, as the hashtag used during the past few months read. A protest that led the government in charge to the “game over” point.

On 15th February, with the country at breaking point and a general situation that worried the West, Prime Minister Heilemariam Desalegn resigned, after proclaiming a state of emergency.

Abiy Ahmed took office in his place on April 2nd.

The new leader is a young man with Oromo and Amhara roots, a former military and combatant, who studied in London and Pretoria. An experienced politician, say those who know him.

Since his first speech, Abiy said he wanted to resume the relationships with Eritrea, which were interrupted in 1998.

The next step was internal politics. The Prime Minister went to the “hot” areas of Tigray, those in the area of ​​the disputed border where the TPLF has maximum support. Here, involving the same leaders of the TPLF, sitting next to them, he talked to the people in the Tigrinya language, explaining the reasons for a new peace. The dialogue, however, was only notionally shared by the TPLF, which actually continues to organize demonstrations against this process in these areas.

For this reason, on Saturday June 23rd many Ethiopians will take to the streets in the capital Addis Ababa, against the TPLF, to show the Prime Minister the solidarity of the country and its desire for peace.

The United States are also hoping for peace between Eritrea and Ethiopia.

In April, the US vice Secretary of State Donald Yamamoto arrived in Addis Ababa. Bronwyn Bruton,  vice director of American think tank Africa Center said it was an important visit.

It is precisely the tense relations with Washington that have prevented the solution of the border issue between Ethiopia and Eritrea, she declared to the Italian agency Askanews. “Better relations with Eritrea will allow America to have more influence in the Horn of Africa,” the analyst concludes.

On June 5th Ethiopia declared it would accept the decision of the Border Commission EEBC, which sixteen years ago had established in a “final and binding” manner that the disputed area, including the city of Badme, was Eritrean.

So President Isaias, responding to the “positive signals” arriving from Ethiopia in this recent period, announced on June 20th  that “an Eritrean delegation will go to Addis Ababa” with the intent of “evaluating current developments in a direct and in-depth manner, to plan future steps.”

Hoped-for words. Which immediately bounced on the web.

Not only in official channels but also via tweets. The Ambassador of Eritrea in Japan, Estifanos Habtemarian defined the Eritrean delegation’s journey as “a constructive commitment”. As well as the Eritrean ambassador to Kenya, Beyene Russom who positively commented, in a tweet, the decision to send an Eritrean delegation to Addis Ababa.

Shortly after President Isaias’ speech, Prime Minister Abiy, in a tweet by his spokesperson Fitsum Arega, thanked him for his positive response, calling it a premise for peace and reconciliation.

While the Prime Minister, addressing President Isaias during a speech on state television in the Tigrinya language – the language of Eritrea – said “it is great news on a great day” referring to the decision taken.

As long as the peace process remained at a standstill, as Fitsum Arega had already commented, the suffering on both sides was unspeakable, a situation that must change, for the good of both.

Two days after these declarations came the US comment.

On Friday June 22nd the White House issued a press release.  The White House is pleased, it reads, that Eritrea and Ethiopia are normalizing their relations and that a lasting peace replaces the state of cold war.

Congratulating President Isaias and Prime Minister Abiy on their “corageous leadership”, America also recalls that as a witness of the Algiers Agreement, it is ready to facilitate the peace progress.

The note issued the day before by the UN Secretary General, Antonio Guterres was of the same tone. The UN has welcomed the steps of the two countries towards peace. Expressing its readiness to consolidate good relations between Eritrea and Ethiopia.

So, in these first days of Summer, peace has been made again between Eritrea and Ethiopia, with Western applause. A condition, which had so far been prevented, not by the hostility of the Ethiopian people, but by the interests of the ruling group.