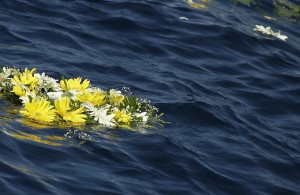 A wreath of flowers floats in the water after Pope Francis threw it into the sea in memory of migrants who never arrived, during his visit to the island of Lampedusa, southern Italy, Monday July 8, 2013. Pope Francis has arrived on the tiny Sicilian island of Lampedusa to greet recently arrived migrants as yet another boatload came ashore carrying 162 Eritreans. Francis came to pray with survivors of the treacherous crossing from Africa and mourn those who have died trying. He flew Monday from Rome to Lampedusa’s airport and was traveling by coast guard ship to the island’s main port. (AP Photo/Gregorio Borgia)